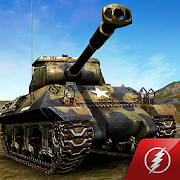 Armored Aces (formerly. Blitzkrieg MMO Tank Battles ) for android is online tank command battles. And, perhaps, this is the only multiplayer tank shooter to which you can pay attention. The game is conducted only online and starts after the moment when you choose your own military equipment for yourself and then the connection to the servers is automatic. The game has amazing graphics, impressive effects and quite good realistic physics engine.

World of Tanks is a mega-popular online game in the genre of arcade tank simulator and probably difficult to find a gamer who at least once did not hear about this game. Despite the promises of the developers, the mobile version of the original game has not yet reached the Android platform, but as you know the holy place is never empty and so much promoted niche cannot remain without attention for a long time. Developers of all stripes and gauges are trying to make something resembling the original, and today we have the opportunity to evaluate probably the most successful attempt.

Studio developer Pseudos Software after long months of work finally released a release version of the game called Armored Aces , the game as a whole, for the mobile version, turned out to be a success, a huge amount of WWII technology, excellent graphics, simple control, but more importantly, the project It turned out quite successful and attracted a huge audience, so that the tankers in the Android version abound.

At this stage, the mod to the new version is not possible!

Download Now
Similar to Armored aces »
More From i6 Games »