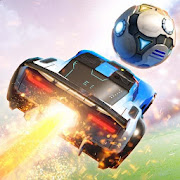 The description of Rocketball: Championship Cup [Mod: a lot of money] hack game

Rocket League won insane popularity for the idea, the simplicity of the gameplay and unprecedented excitement. Speed and football are joined together. But developers are not in a hurry to transfer the game to mobile platforms, so analogs began to appear. You are waiting for almost all the same features as in the original. Several cars, tournaments and a 2-by-2 game. For simplicity and ease of operation, the machine itself turns in the direction of the ball, but in no way prevents it from maneuvering on its own.