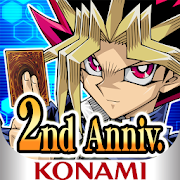 Once upon a time, when the pyramids were only built and the rulers of Egypt were alive, there were magical duels called "Game of Shadows". The priests and the pharaohs participated in the battles, but after some time, the magical energy broke free and threatened to destroy all life. At the cost of his life, one of the pharaohs put energy into various objects called "Magical artifacts". After several thousand years in the modern world, people began to play Duel Monsters, an analogue of the old game of shadows, only with the use of high technologies. Among the participants was a schoolboy named Yugi, who was considered the best in his field. But in fact, he is the owner of one of the Magic artifact, which is trying to uncover the mystery of the pharaohs and find other magicians.

Gameplay is a mixture of Pokemon and Heartsone. You have a deck of cards that you call on the battlefield and fight them with the enemy. Whoever wins the first fight will be able to go on, the loser will die. Each card has its own picture, indicators and abilities. To make a deck correctly, you will have to study the characteristics of each character and each creature!

The game requires the Internet and downloads the cache automatically (~ 400 mb).